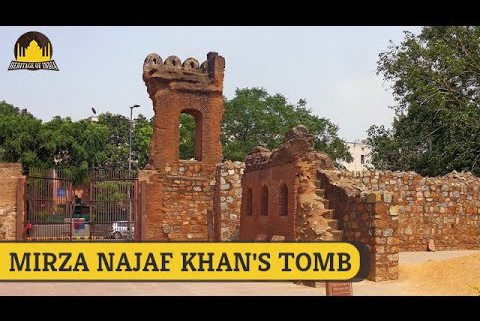 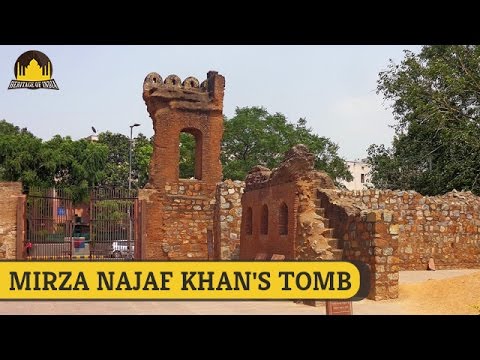 The Tomb of Najaf Khan lies opposite Safdarjung Airport which is situated towards the eastern side of the Delhi-Mehrauli Road and in close proximity to Safdarjung’s Tomb. It is easily accessible by local buses, auto rickshaws and hired cabs. Mirza Najaf Khan was probably born sometime in the year 1722 AD though there is no conclusive evidence to this fact. He was an Adventurer who relocated to India and became a noble in the Imperial courts of Mughal Emperor Shah Alam III. A Persian by native, his ancestry lineage traces back to Prince Safavi, a royal Persian dynasty that was overthrown by Nader Shah in 1735 AD.

Mirza Najaf Khan passed away on 26th April 1782 after serving the Country for 42 years and within six years of his demise, the Mughal Empire became feeble when its Military Forces ceased to exist. He never had a son and hence was survived by his adopted son named Najaf Quli Khan, who later, converted to Hinduism and paved his own way and a biological daughter named Fatima.

Najaf Khan was buried in a separate enclosure that lies next to Safdarjung Airport in Delhi. His Tomb is constructed in a ‘Charbagh’ or ‘Four-square Garden’ style which is typical of a Mughal as well as Persian style of architecture.

There are two marble cenotaphs next to the Tomb site of Najaf Khan with inscriptions revealing that Najaf Khan is buried in one grave and the other is where his daughter, Fatima, lies buried after she died in 1820 AD. The real graves are situated way below (underground) in the heart of the chamber just underneath the raised platform.

Today, Najaf Khan’s Tomb is survived by a wall enclosing the Garden area where his Tomb sits and an entrance doorway on the eastern side; all in ruins, however, a newly planted and reasonably maintained garden now dresses the enclosure of the Tomb site.

By metro: The nearest metro station is Jor Bagh. Take an auto from there to reach the Najaf khan tomb.

By car: You can park the car at the Najaf khan tomb

1-There is no charge for anything else (no fee to be paid to the facilitator ). However, tickets for camera etc., to enter any specific monument will have to be borne by the individual.

2-Any sort of soliciting or promoting any product or service among the photowalkers is a strict NO. These photowalks are to encourage amateur photographers and beginners to come out and enjoy photography, please help us maintain the spirit.

3-Some people want to help us. There are two ways,

a-tell about the club to as many of your friends as possible and ask them to join us either on the Facebook page (look for Delhi Photography Club, non-profit organization)   when you search on Facebook

4-Please bring your water bottles, shades, and wear comfortable shoes as it will be hot and sunny.

5- Please send 10-15 photos zipped and compressed to virendra@delhiphotographyclub.com after the walk for submission to DPC facebook album.

Rejoice Photography Lovers!! Continuing the series of looking hot with camera this summer
Let’s meet the tiger and share some memories

This is going to be a 2 day/ 2 night (stay in Ranthambore) wildlife photocapture trip to take some breathtaking photos, learn photography from peers, and be your creative self 24×7 leaving office and work behind!

The details for this trip are as follows:

We are going by Tempo Traveller.

Timings: 9.30 pm IIT main gate (pls be there 30mins prior to departure)

Overnight journey to Ranthambore  via Alwar and Dausa

Reach Ranthambore at 5.30am
Going for the First Tiger Safari at Ranthambore tiger forest Reserve

Check-in at Tent   with Swimming pool

Coming back to resort and after breakfast leaving the tents

Reaching Delhi by 11 pm on sunday

Stay: will be on twin sharing basis in Tent Resort with Swimming pool.

Gear: You may carry tripods and wide-angle lenses and of course zoom lenses. Comfortable shoes, shades and sunscreen are important things to carry. A digital camera, batteries and memory card all set! And needless to say – enthusiasm in abundance!

Mode of Travel: We will be travelling by Tempo traveller.

Meal:  Simple vegetarian meals will be provided by the club.
The group will follow the itinerary mentioned above, however if one wants to visit places at one owns will, can visit accordingly on their own.

Please carry the rest of the amount with you (only cash) 🙂 You can also pay the remaining amount at our club in Shahpur Jat Village.
Please note: If for any reason you are not able to come, the registered amount is non-refundable due to advance on accommodation reservations. 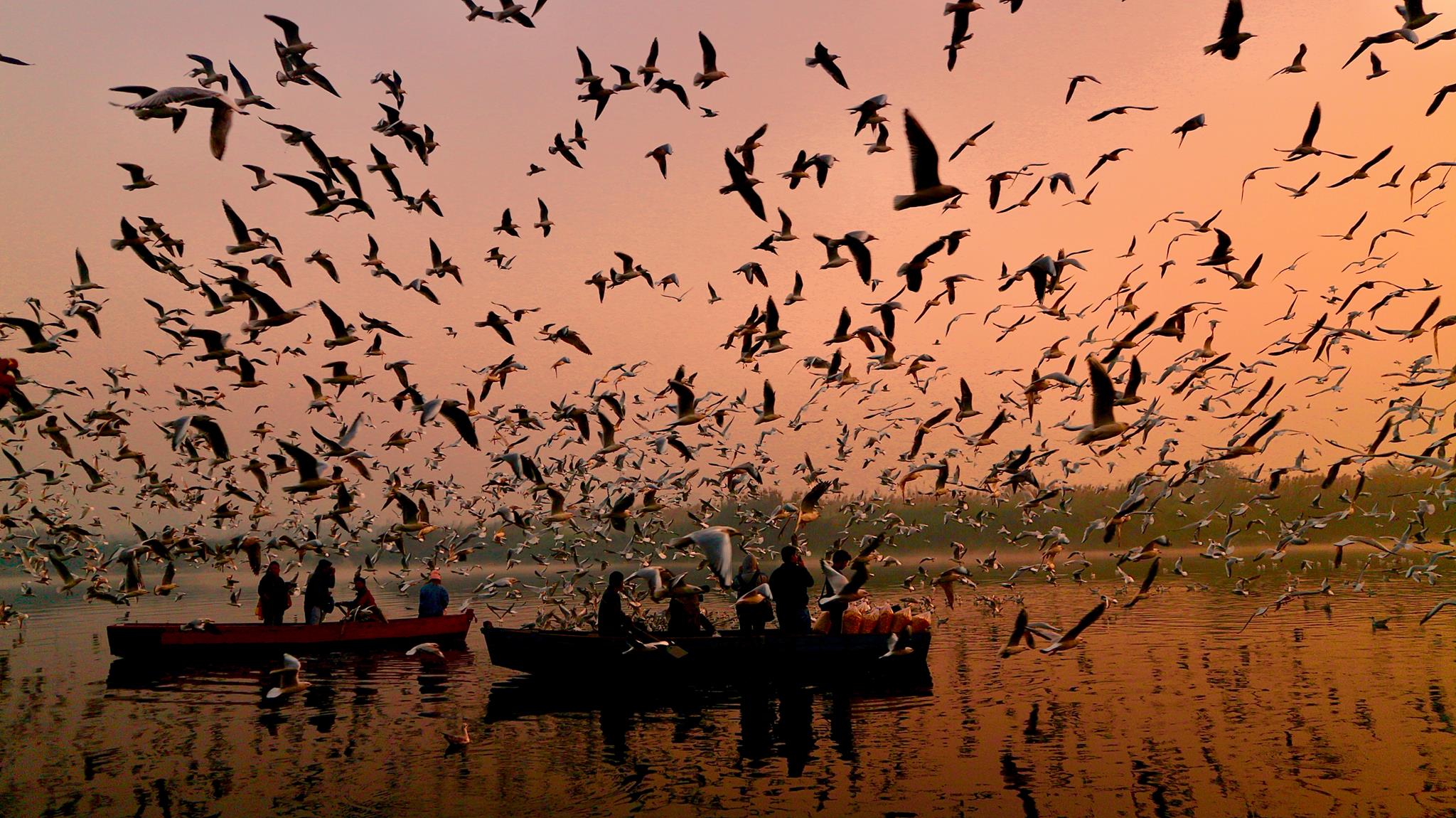 A unique place to click people , portrait and amazing landscapes with migrant birds.

Big rivers have throughout history been important to the development of capitals. This Photowalk is  dedicated to the Yamuna river that has been an important yet silent witness to Delhi’s history. The tour starts from the Yamuna at Nigambodh Ghat which unfolds the ritualistic devotion of how the Hindus treat the historic river.

The Yamuna is a goddess to the eyes of her devotees despite its current struggles with pollution. Topping it off with an unforgettable view of the Jama Masjid back through the streets of Old Delhi, discovering the Yamuna route is truly a unique and memorable experience.

The beginning of legend: Nigambodh ghat seen from across the river. These are the sacred waters within which Brahma recovered the book of knowledge and the powers of divinity, which he had lost. Nigambodh Ghat is thus a place of ending, it marks the finality of the mortal core; but it is also the source of a regeneration of immortal wisdom, of sacred knowledge. Death and immortality exist together.

The great epics and sacred texts tell us about the beauty and power of the river Yamuna. This is the daughter of the sun god; sister of Yama, the god of death; lover of Krishna; sister to that other great river goddess, Ganga.The Gods themselves, Brahma and Shiva, are said to worship her.

The Ras Lila paintings of Lord Krishna consorting with his gopis are magical, ethereal, depictions of the river surrounded by lush sacred groves. On her banks, the great Sufi saint Nizamuddin Aulia spread his divine message. This is a river revered through antiquity; a river by which a unique culture flourished.

Today, however, as the Yamuna winds her course through the 22 kilometer stretch of Delhi, she bears no resemblance to her legend. Decades of wanton disregard have turned her into nothing more than a stinking sewer that is biologically ‘dead’ as it flows out of Delhi.

Yet there is a little stretch, a place where the story of Indraprastha begins; the story of the Pandavas, the story of Delhi. Here, despite the filth and degradation. From Nigambodh Ghat to the Lal Pul or the Old Iron Bridge, you discover ways of life that are still intertwined with the river and its sacred avatar. 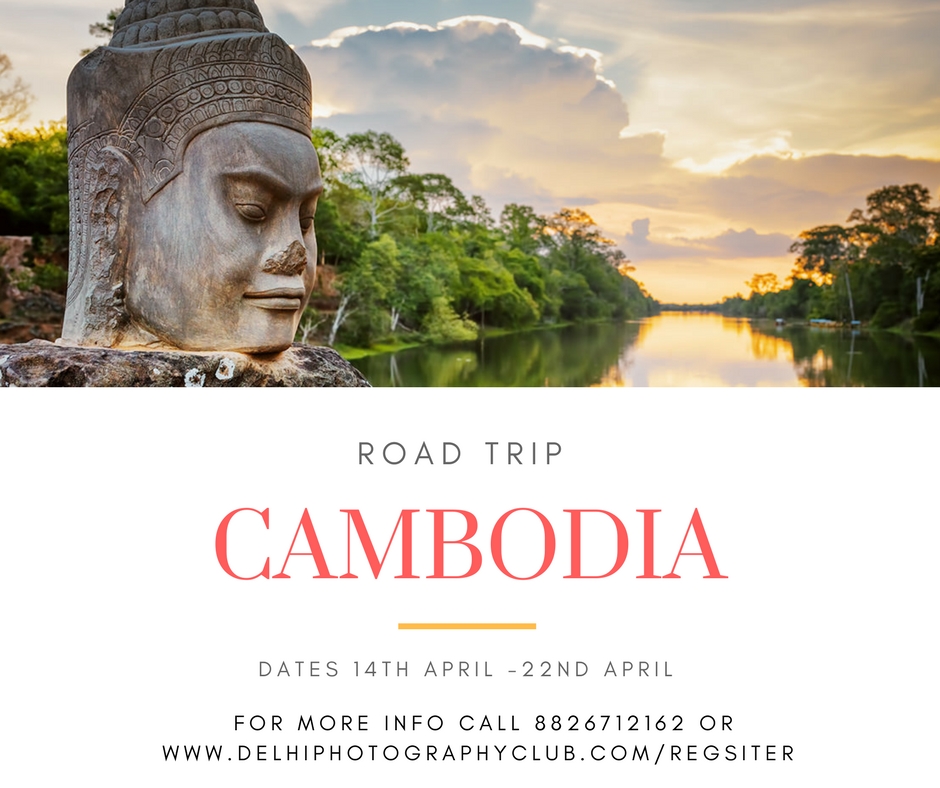 This gives me Immense pleasure to Invite you for the next DPC Photo Trip to Thailand and Combodia .

As usual we have the history of exploring the unexplored . So this time we thought of doing a Road trip to Bangkok to Cambodia and so on .

How are we travelling: Plan for the Trip

Cambodia lies entirely within the tropics, its low-lying central plain bordered by low mountains and uplands. In its transitional plains, forested elevations are found as the landscape extends outwards. And it is in these geographical changes that you will find some magnificent temples, royal palaces and other ancient architectural marvels by which to be enthralled.

Despite centuries of political turmoil, depredation and horrors of war, this nation stands as yet another testimony to the essence of endurance, a vital spirit of the human condition. Not only is its culture rich in lowland ethnic majority but also in its diverse hill tribes. In its enchanting landscapes, Cambodia has temples and beaches that attract seekers of raw elegance.

Meanwhile, renowned for the Angkor Wat ruins, Siem Reap is a province in which ancient temples exist amidst natural geographical beauty.

Like most Asian countries, Cambodia too comprises centuries of history in its varying terrains. So you may breathe its air, bathe in its light, and return with many memories to fill you travel memoirs.

What to see and photograph:

Trip to Thailand and  Cambodia will begin at New Delhi Airport. Buddhist monasteries there will make for interesting photography subjects and kindle your vision and imagination, coaxing you gently into making evocative images.

Dedicated to Shiva, the pink limestone walls containing the best bas reliefs of any temple at Angkor, Banteay Srey will charm you. The wooden houses on tall stilts in Kampong Kleang are a delight to watch. At the Tonlé Sap Lake, floating houses and people’s way of living are some amazing details you would want to record as photographs.

The magnificent remains of the Khmer Empire, the Angkor Archaeological Park will be a breathtaking encounter visually, architecturally and artistically. Explore and photograph the hidden temples, temples of Bayon, Baphoun and Terrace of Elephants and The Leper King. Visit the main temple, Angkor Wat, which is arguably the main reason many visit Cambodia.

Stay: will be on twin sharing basis in 3 star Hotels and guest houses of that repute (Remain assured) .

Mode of travel: We will be traveling by Flight and local travel will be in taxi and mini buses and state transport .

Does not include tickets for camera and equipment if any) 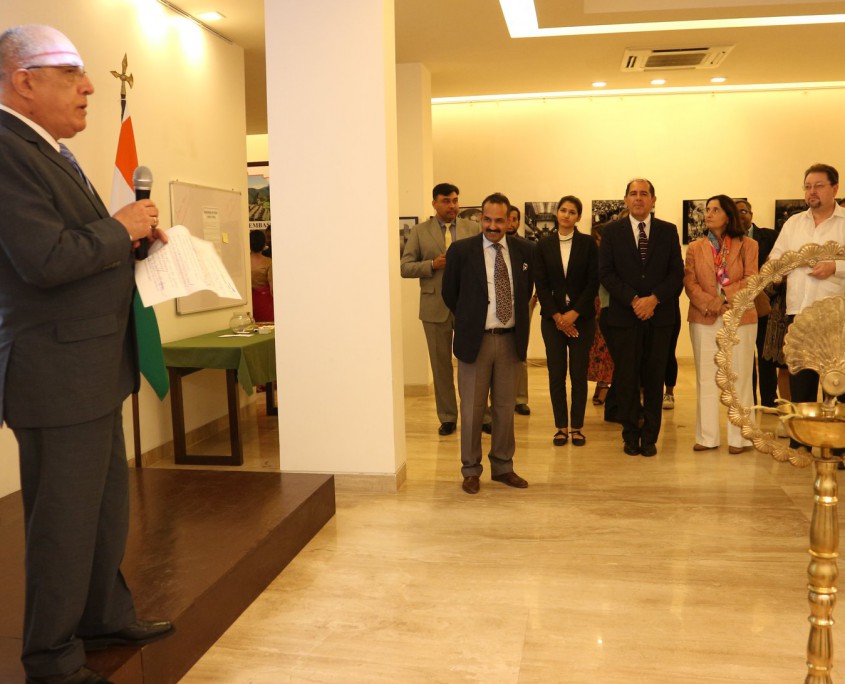